You are here
Home > Beginner > The most profitable mining. 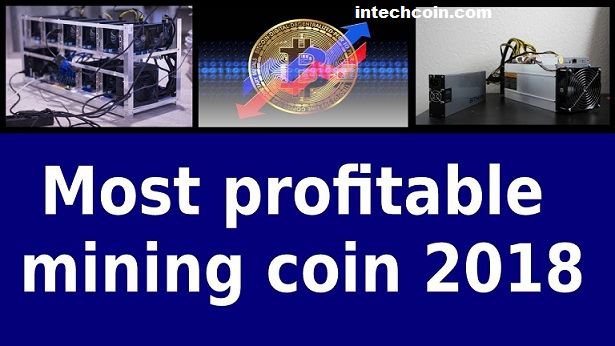 Cryptocurrency mining has already become a part of our life. Electronic money is constantly evolving, new types of currencies are emerging, the productive capacity of computers is increasing, and the algorithms of calculating electronic gold are becoming more and more complicated every year. Many skeptics will say that it is too late to start mining, the moment is missed. But does the matter really go in such a way? Maybe they are just afraid of the emergence of new competitors in this niche of earnings? Is it profitable to start «digging» bitcoins this year?

It’s not at all a secret to anyone, that a well-tuned mining brings a fairly big and stable income regardless of your knowledge in IT field or exchange investments. It is profitable due to one simple reason – nothing’s to be done for the earnings. You just sit and look at the relevant hardware equipment and the money itself drips into your virtual wallet.

Is it worth starting now?

Many “experts” of virtual gold mining will say that you have missed the train and should leave that foolish idea of virtual earnings. But anyway, the number of miners is increasing every day and the price of bitcoins is shooting up. Every novice businessman has to make a certain choice in order to answer that question. And so as to make a correct and deliberate choice It’s necessary to make appropriate calculations regarding future investments.

The most important factor of your project is whether it is profitable or not. In order to calculate profitability, one first has to work hard and pay attention to plenty of factors. There are quite a lot of factors but the basic ones are as follows:

* the computing power of equipment – the complexity of calculating one bitcoin is increasing with geometric progression and for long shillings it is necessary to keep up to date in terms of purchasing new equipment;

* power consumption – you have to think it over in advance about the source of electricity for your future farm. Power rates in all regions are different. The most advantageous options for installation are in the private sector, or well, in an apartment with a wire bypassing electricity meter (but this is fraught with consequences);

* working hours – here it means not the run time of the farm itself but the time you can spare for its service and upgrading;

* profit reduction with the lapse of time – nobody knows how many easy-earning seekers will connect to the system during the year and that will lead to increase of computational complexity and reduction of profit in its turn.

Video cards are exactly used for home mining. Processors are also good at it, but their computing power is much inferior to video processors of modern gaming cards.

The qualitative work of a small farm will be insured by minimal components that are freely available at any of the trading platforms, both domestic and Chinese. The configuration of the medium format is quite simple: 5-8 video cards, the same number of risers, a motherboard with the required number of connectors, an average processor, 4 gigabytes of RAM (that’s a reserve, 2 gigabytes are quite enough), a powerful power supply unit (700-850 W).

Brand and trade name of processor and RAM are absolutely of no importance. The main thing is a durable power supply unit, you’d better not to be stingy in that matter. Video cards may always be chosen of two manufacturers Radeon and nVidia, which constantly compete with each other tough in increasing the performance of their game cards.

At the moment the most profitable video card for work is Geforce gtx 1080 ti (in relation of price/income). It is a very efficient device with minimal heat generation and noise level.

What are we going to dig?

Currently there are quite many kinds of currency that can be mined in a virtual way. There are five most common crypto-currencies, which provide a stable mining profit:

* Bitcoin is one of the first, most popular and stable for mining digital currency;

* Lightcoin is electronic currency which doesn’t charge a fee for transfers to anywhere in the world;

* Quarkcoin provides with a ninefold level of encryption;

* Capricoin uses radically new technologies of encryption and is a very simple currency at exchange transference and management;

* Worldcoin is the newest currency that raised its own cost by 7500 percent in just one year.

As we can see the choice of currency for mining is rather varied. The cost is constantly rising, but the countries with their financial systems can do nothing. A new stage of evolution in economics is coming. Electronic means of payment which can’t be traced or intercepted is the future.

It’s quite simple and clear as for the hardware equipment but what to do next after the equipment is plugged in and is ready to mine virtual gold. Special mining services will help us as there are pretty many of them in the vast space of the Internet and the most popular are as follows: HashFlare, HashOcean, GenesisMining. Each of the services lets you mine any currency, has a significant number of positive feedbacks, a powerful user technical support service, guarantees stable and continuous performance, make everyday payments and has a fairly large period of continuous and stable service.

Unwilling to pay huge commission fees at the above-mentioned trading services, many users join in pools (groups) thereby increasing the profitability of their project as for any system a pool is just one user.

Today one of the way to raise money on the Internet is to provide somebody with your equipment remotely for certain tasks. Various firms and companies offer everyone to rent hardware equipment of any capacity for a while (an unlimited period of time). In other words, it isn’t necessary to sit and pore over the farm in a stuffy and small flat. But as you see you will have to pay percentage of earnings to the owner of hardware.  On the other hand, there are practically no risks, a certain kind of stability and minimal investments.

In 2017 cloud mining services offer huge capacities for acquiring various crypto-currencies. Adequate profitability is also promised: from 0,13% per day up to 3% per day. The rent price will depend directly upon the time of hardware rent.

The future is for virtual coins

By all means bitcoin is the most profitable crypto-currency for mining. The cost of virtual money is constantly going up, and many countries seriously consider on legislative level the opportunity of using such a currency for domestic transactions. But the complexity of coin calculating is permanently increasing and it’s necessary to upgrade your hardware for sufficient income by investing earnings in new farms. Besides the use of video cards for mining greatly shorten their life time .

Analytics of all hues are repeating over and over again vying with each other that the most profitable mining in the near future is cloud one. The classical way of earnings moves to the background. It’s much more profitable to rent a part of computing power of high-performance server than to mine at home computer and ruin all hardware equipment in the end.

The profitable component of mining is quite high. However, a lot of real money is ought to be invested for a stable income. There’s always a risk of equipment fail for various reasons be it overheating, power surge or delays of new hardware supplies. First try to rent hardware for mining using rather simple services. It’s impossible to foresee what kind of virtual currency will rise to the top of financial pyramid in the near future. The new calculating algorithms, different exchanges and trading platforms keep emerging occasionally but only one thing remains unchanged – the usage of virtual money is coming firmly and confidently into our reality. In the near future private users will definitely yield to big farmers who enjoy the support of rich companies and huge resources both technical and human. The outlook is rather vague, but no one knows what will happen to the rate of exchange soon and what algorithms will appear in a short time.

Hoax and deception by GEM4ME or an innovative breakthrough of ICO technologies?